Victory for Pablo Quintanilla in RallyGP 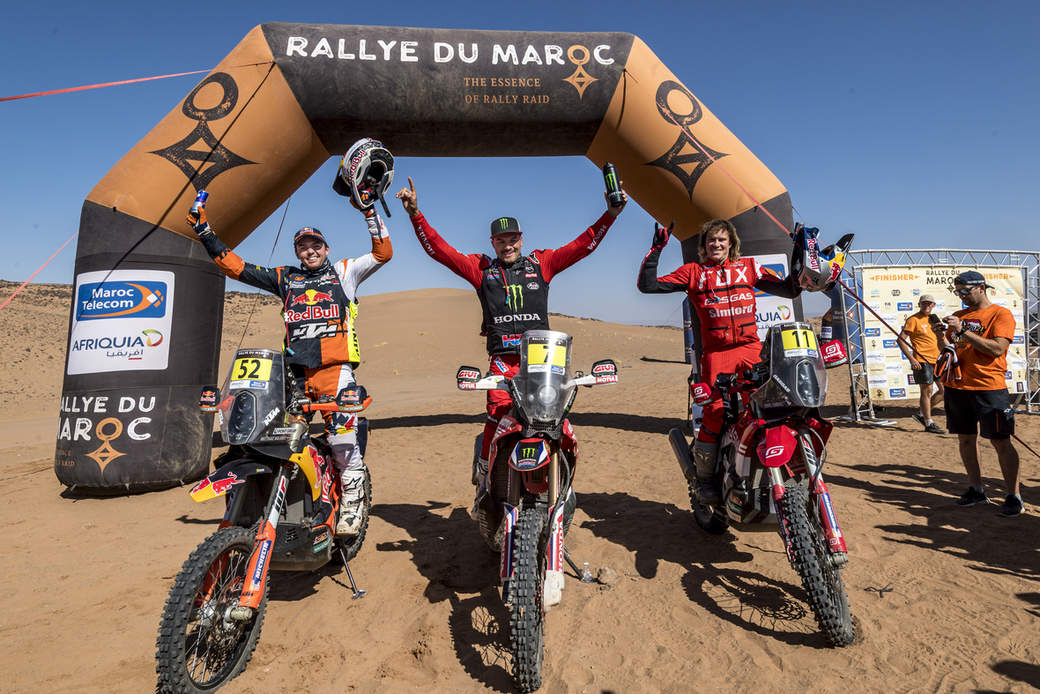 Pablo Quintanilla showed his motivation on his first race with the Honda team, while rookies stood out in Rally2.

None of the top riders wanted to open the track for the first desert stage, so Joaquim Rodrigues (Hero) won the opening Super Special stage in RallyGP, despite the x4 coefficient being imposed by rally regulations. The Portuguese was the first to set off into the desert but, after 120km, he was confronted by a beautiful sandstorm which limited visibility to only a few tens of metres.
Under these conditions, many riders, including Price and Branch, lost their way and made circles in the soft sand to find the right waypoints. Meanwhile, Franco Caimi broke his engine.

Barreda incurred a 45-minute penalty for missing three waypoints on the third stage and handed the victory to his Honda team-mate Ricky Brabec, who finished ahead of Pablo Quintanilla.

The race tightened seriously on the fourth day on a stage won by Daniel Sanders (GasGas). At the finish, Walkner (KTM) led by 37 seconds from Quintanilla (Honda), but the Chilean started behind him on the crucial last morning on a special shortened to just 166km.

The last shortened stage was by no means a formality. Starting third, Quintanilla attacked to try and catch Walkner. The Chilean won the special and the race with a 1min 59sec margin over Walkner!

“The Rally of Morocco was hard on the bike but also on the body,” said Quintanilla at the finish. “The stages are long, almost like in the Dakar, and this gives the opportunity to gauge oneself. I thank the Honda team for all the hard work. It was a difficult week but ultimately ended with a victory. Now I am very excited and motivated for the future!"

Daniel Sanders (GasGas) finished third behind Walkner. The young American demonstrates his potential in each race and his aptitude to progress.

“In our sport it is so easy to make navigation mistakes or crash that winning the FIM World Champion title here is super important to me,” said the Austrian. “For the past two years luck has not been on my side, but now I hope we can celebrate it in Monaco during the FIM Awards."

In Rally2, rookies shone through and the American Mason Klein (KTM) rode as fast as some RallyGP drivers. He celebrated his 20th birthday on the Rally of Morocco by winning the category, ahead of Paolo Lucci and Bradley Cox, the son of South African Dakar legend Alfie Cox.

“This is my first Rally,” said Mason Klein. “I didn't think I would spark off. After the first day, I realised that maybe there was a way to make a result… I learned a lot."

Accompanied by his father Alfie, Bradley Cox, too, showed great adaptability, a high level of riding and the ability to learn quickly from his mistakes. “The first day, I made a navigation error and I missed a waypoint. I wasted time looking for it and I understood that it was better to lower the pace a little and not to trick. I finished the rally in third position with victory on the last special. I am super happy!"

In the quad category, the laurels went to Manuel Andujar (Yamaha), ahead of Aleksandr Maksimov. Rafal Sonik was the victim of a mechanical breakdown in SS4 and was a long way back in the standings.

The final round of the FIM Cross-Country Rallies Championship is the Abu Dhabi Desert Challenge and takes place from November 5-11.