Pannonia Ring will host round two of the 2021 season 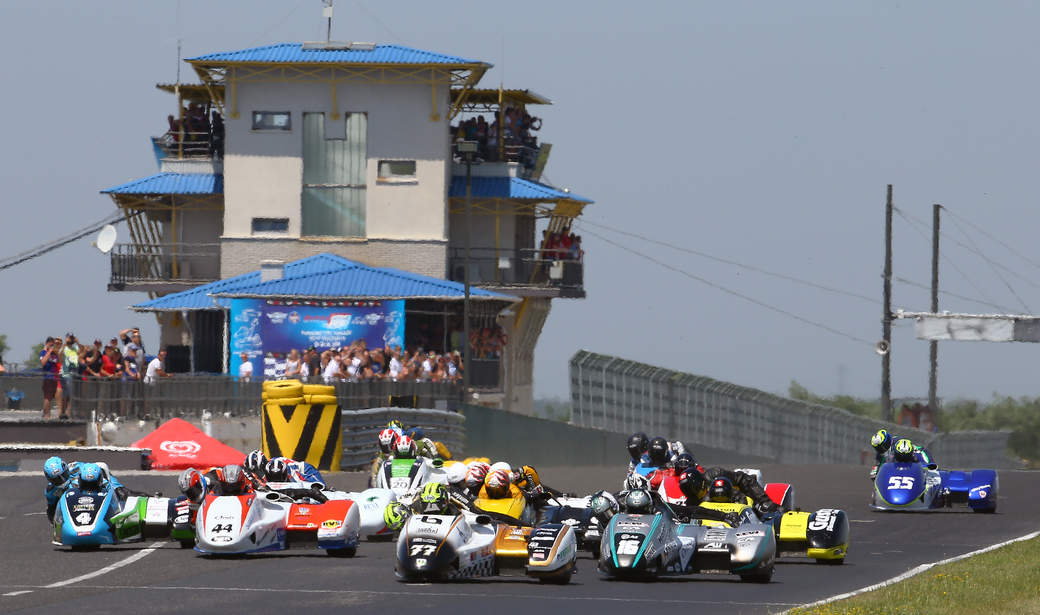 The 4,740 km Pannonia Ring in Hungary will host the next two races in the FIM World Sidecar Championship” on the 26th and 27th June.

The Swiss team of Markus Schlosser and Marcel Fries will arrive at the Pannonia Ring leading the championship with 45 points.  A win and a second place in Le Mans rounded off a near perfect weekend for Schlosser and Fries.  Pole position and a fastest lap in race two was just what the team wanted, it seems all their winter testing has paid off.

It was not plain sailing for Schlosser and Fries though.  Tim Reeves and Kevin Rousseau were always setting the pace.  Reeves and Rousseau took the race one win from Schloser and Freis.  If it had not been for a broken gear change lever in race two, which left Reeves and Rousseau crossing the line in fifth place, the team could have been leaving Le Mans with two race wins, Schlosser and Freis were leading race two, but Reeves and Rousseau looked very happy following the Swiss pair, until the broken gear change lever left the team stuck in fifth gear for the rest of the race.  A fifth place was a good result really, as it could have well been a DNF for the team.

Reeves and Rousseau head to “Pannonia Ring” with 36 points.  Joining them on 36 too will be Todd Ellis.  What a weekend in Le Mans for the young English driver.  His regular passenger Charlie Richardson could not attend Le Mans, so step up Emmanuelle Clement, the young French lady passenger would have been passengering for former champion Bennie Streuer, however an accident while testing had ruled out Streuer from racing.  It was the first time the Anglo French pairing had teamed up.  Qualifying went well for the pair, at one point, the pair were fastest, but in the end the team were front row starters in second spot, just in front of Reeves and Rousseau.  Race one was an outstanding third place for the young team.  The team were overjoyed with the result, and they were credited with the fastest lap of the race too.  Race two however was better and just finished off a great weekend.  With Reeves and Rousseau following Schlosser and Freis round, Ellis and Clement stuck with the leading pair.  When Reeves and Rousseau hit their problems this left Ellis and Clement to take over the second place and they kept this till the chequered flag to round off a great weekend.

Charlie Richardson will be back passengering for Ellis in Hungary.  Bennie Streuer still will not be fit for racing, so I am not sure if we will see Emmanuelle Clement racing at the Pannonia Ring.

Pekka Paivarinta had a terrible start in Le Mans.  During free practice his passenger Kim Friman fell from the outfit.  He was ruled out of any further participation in Le Mans by medical advice.  Paivarinta was thinking he would be heading back home, but it was luck that lady Dutch passenger Ilse de Haas was at Le Mans.  With all paperwork checked, leathers and helmet all good the pair set off for qualifying.  The two races in Le Mans turned out really good for the team, race one, fourth place, but race two was a sensational result for the team, third place, so the surprise pairing are heading to the Pannonia Ring fourth in the championship with 29 points.  Also Ilse de Haas will continue with Paivarinta for the rest of the season now.

With two ladies on the podium in race two at Le Mans, maybe the first time in motorcycle circuit racing.  Great for women in sport.  It would be great to see again.

Unfortunately, the fifth place team in the championship will not be at the Pannonia Ring Ted and Vincent Peugeot were in their home GP as wild card team.  They did have a great weekend and only narrowly missed out on a podium place in race two.
Coming to the “Pannonia Ring” in sixth place with 20 points, a new team to the championship, Scottish driver Stephen Kershaw with his English passenger Ryan Charlwood.  This will be another new track for the team.  They will be hoping that the overheating problem they had in Le Mans will be cured as temperatures can get way up in the high 30’s in Hungary.

The Swiss pairing of Lukas Wyssen and Thomas Hofer are sitting like Kershaw and Charlwood with 20 points in the championship.  The team have gone well here in Hungary in the past and seem to like the circuit, so they will be hoping for good results from the two races.

Kees Endeveld and Hendrik Crome come to the Pannonia Ring with 16 points.  The team will be hoping to increase their points tally, and hope for a trouble free weekend.

There will be some more teams racing at the Pannonia Ring, and it will be good to see them back again, they have all raced in the championship in recent years.  Slovenian Janez Remse with his Austrian  passenger Manfred Wechselberger, Josef Sattler and Luca Schmidt.  These teams will be hoping for trouble free racing, and they could upset the points table for the other teams.

Kevin Cable and Kyle Masters will want to forget their first meeting of the championship in Le Mans.  Mechanical problems ruled them out of the result sheets from the two races.  The team will have regrouped and will be hoping to get their championship campaign up and running here at the Pannonia Ring.