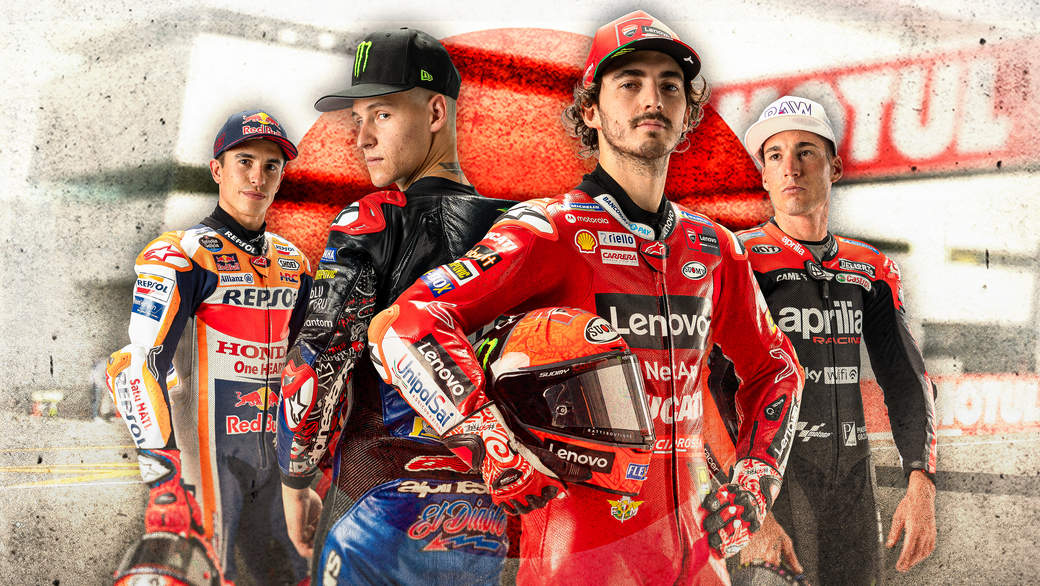 Japanese GP is this weekend! © DORNA

The headlines overflowed at MotorLand Aragon, and now the paddock packs up and heads east for the Motul Grand Prix of Japan with three riders split by 17 points and everything to play for. Not since 2019 has MotoGP™ been able to race at the venue, which in some ways now seems like a different era. Three years on, the immediate memory that comes back bodes well for the luckless duo from Aragon: Marc Marquez (Repsol Honda Team) vs Fabio Quartararo (Monster Energy Yamaha MotoGP™).

Quartararo now has only ten points in hand at the top of the table, but it was through no fault of his own and he'll be more eager than ever to push to extend it again. He also arrives knowing that his last performance at Motegi, vs Marquez, was one of those that cemented his growing legend. So will that experience count? With action beginning on Friday afternoon, he will be hoping it helps him hit the ground running - as will Yamaha as they race on home turf for the first time in a few seasons.

Elsewhere at the Iwata marque there remains plenty to talk about. Cal Crutchlow (WithU Yamaha RNF MotoGP™) was the first Yamaha home after that bad luck for Quartararo, and the Brit has therefore contributed Constructors' points already - no mean feat as El Diablo was the scorer until Sunday. Crutchlow has plenty experience at the venue too. For Franco Morbidelli (Monster Energy Yamaha MotoGP™), meanwhile, that was bad news - and he needs to find his way back into the form that's seen him win races.

So, Honda. After the dust settled at MotorLand, we were left with even more questions about Marquez as the number 93 failed to make it out of Q1 due to yellow flags, and then failed to make it far into the race with that bad luck. Where would he have finished? There remain some cards close to the Repsol Honda rider's chest and home turf for the factory is an interesting place to have to play them. As a true veteran now, Marquez knows the track better than everyone on the grid - so what can we expect? And can Pol Espargaro move forward on the other side of the garage?

Alex Marquez (LCR Honda Castrol), meanwhile, Motegi has always been a good track and the number 73 has multiple wins in the smaller classes. But he's also riding it for the first time in MotoGP™, as are many on the grid, so it will be an interesting one. There is also plenty on the line for Takaaki Nakagami (LCR Honda Idemitsu) as he even races a race to fitness. Getting caught up in that early race crash has left him with an injured hand and he'll need to pass a medical - but he also has some serious experience at Motegi. What can he do on home turf? There will be home representation too for Tetsuta Nagashima as he wildcards with HRC, and Takuya Tsuda will be replacing Joan Mir at Team Suzuki Ecstar as they face a bittersweet final weekend on home turf and Alex Rins looks to add another podium.

Meanwhile, Ducati march on. After the duel at Misano, Francesco Bagnaia (Ducati Lenovo Team) and Enea Bastianini (Gresini Racing MotoGP™) did it again at MotorLand for another spectacular finish, and this time with Bastianini on top. But Motegi could be a different story as the 'Beast' rides the track for the first time in MotoGP™, and Bagnaia has only one outing in the premier class under his belt at the venue. That's also true of Quartararo, but the two had very different races. How will that ten-point gap look this Sunday?

Elsewhere at the Borgo Panigale factory there are plenty of talking points as well. Jack Miller (Ducati Lenovo Team) has solid experience of Motegi, and Johann Zarco (Prima Pramac Racing) too but not with Ducati. Jorge Martin (Prima Pramac Racing) will be heading in to taste the track for the first time in the premier class, as will Luca Marini (Mooney VR46 Racing Team). With so much having changed since 2019, will that prove a sort of reset? Marco Bezzecchi (Mooney VR46 Racing Team) will hope it will as he looks to move forward again too, although the rookie continues impressing.

That phrase applies to Aprilia Racing and Aleix Espargaro even more. After a longer stint off the podium and watching that gap grow, MotorLand saw a return to the rostrum and after a weekend of ups and downs, too. That seems a statement of intent from the number 41 as he pulled it out the bag when needed on race day, and he's back to within 17 points of those ahead. Will the lesser experience for everyone on the grid also play into their hands? The RS-GP is a newer bike, and Motegi leaves everyone in need of data on the machinery they return with. Maverick Viñales (Aprilia Racing) will also hope so, although the number 12 was caught up in avoiding that early race incident, he'll most definitely want more from Japan after his recent podium pace took a dip.

KTM will be interesting to watch, too. Brad Binder (Red Bull KTM Factory Racing) put in a stunner at Aragon to come home fourth, and he held third for much of the race. That's their best result since teammate Miguel Oliveira won in Indonesia, and they'll want to back it up. Oliveira has ridden Motegi in the premier class and Binder hasn't, but there could be some opportunity on the horizon again as returning to the track for the first time since 2019 promises a shuffle. Can the Mattighofen factory fight for the podium again?

Quartararo, Bagnaia and Aleix Espargaro are now split by just 17 points, Marquez remains a somewhat unknown quantity, and we're heading onto home turf for Yamaha, Honda and Suzuki. There's plenty at stake in the Motul Grand Prix of Japan, so make sure you don't miss it as we go racing at 15:00 (GMT +9) local time on Sunday!

Moto2: Ogura looks to fight back on home turf
Fernandez is now seven points clear, but next up it's Mobility Resort Motegi...

The Japanese rider is now an established presence at the front in Moto2™, and he'll be keen to hit back and use experience to his advantage. Like many in the field - the majority - he hasn't ridden Motegi in the intermediate class, but he knows his way around the track better than most with that home circuit knowledge. Can that make a key difference this weekend?

For many on the grid like Acosta, however, the track may also prove a clean slate. The likes of Canet and Celestino Vietti (Mooney VR46 Racing Team) have ridden there in Moto3™, but many on the grid never have so it's a race to get up to speed. But not for everyone: Somkiat Chantra (Idemitsu Honda Team Asia) has scored points there in the class, and Jake Dixon (Inde GASGAS Aspar Team) and Joe Roberts (Italtrans Racing Team) have experience there. Jorge Navarro (Flexbox HP 40) was the top finisher of the returning Moto2™ field in 2019 in P5... but Fernandez was no slouch either with a top ten result. So will the duel with Ogura continue, or will the pack shuffle? We'll find out on Sunday at 13:20 (GMT +9)!

Veterans vs rookies: will Motegi shuffle Moto3™?
A whole host of the grid have never ridden the track, putting Sasaki, Suzuki and their fellow veterans in the spotlight

Izan Guevara (Gaviota GASGAS Aspar Team) hammered home his advantage at MotorLand with another superb win, and it's now a sizeable 33 point gap at the top as the paddock heads for Mobility Resort Motegi. But next it's unchartered territory for the number 28 and his fellow fresh faces in the class, with the veterans looking to stamp some authority and two home heroes in particular lining up a win.

Guevara's teammate Sergio Garcia will be the first looking to use experience to his advantage, closely followed by Dennis Foggia (Leopard Racing) as they both came away from Aragon almost empty handed. The likes of Jaume Masia (Red Bull KTM Ajo) and John McPhee (Sterilgarda Husqvarna Max) will also want to make their previous knowledge pay. But the weekend will have all eyes on the home heroes as the grid returns to Japan, and two of them especially will want some home glory: Tatsuki Suzuki (Leopard Racing) and Ayumu Sasaki (Sterillgarda Husqvarna Max).

Suzuki has hit some good podium form this season and will most definitely want to replicate that on home turf as a minimum, but it's Sasaki who's really on a roll. despite some bad luck and trouble, the number 71 is homing in on the Championship top three and arrives back on home turf as a Grand Prix winner and consistent podium finisher. Can he take another victory at Motegi?

Tune in at 12:00 (GMT +9) as the second race of the triple-header gets in gear, with plenty of questions to be answered at Motegi.