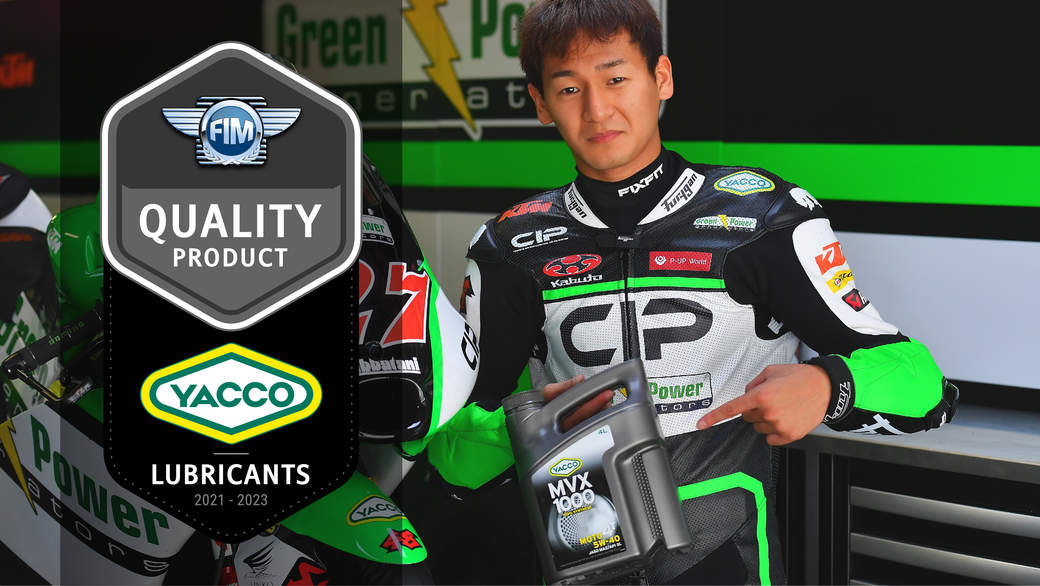 Founded in 1919, French lubricants company YACCO is the latest addition to the newly launched FIM Quality Product Programme. The initial agreement between the FIM and the company that has achieved more than five hundred World records in motorcycling and motoring will run from 2021 to 2023 inclusive.

Whilst YACCO’s offerings are varied and diverse, it is a brand with a strong association in the motorcycle sector and is well represented in the World of racing through its support of the CIP-GREEN POWER team in the FIM Moto3 World Championship and the OX Moto team in the Borilli FIM EnduroGP series, plus the FR25 team in the French Elite and Supercross championships
.
The FIM Quality Product programme is a trademark license that provides a great opportunity for the motorcycle industry to associate their products with a FIM trademark licensed to products complying with recognised international quality standards specific to each field.

An extensive selection of YACCO products is covered by the recently signed licensing agreement, these include three different gearbox oils, seven two-stroke lubricants, no less than twelve four-stroke oil variants and their Racing Brake fluid.

As is the case with all applicants, the FIM International Technical Commission is responsible for assessing the manufacturer’s product being submitted to the programme, taking into account any accreditation, certification or quality recognition previously obtained, as well as its compliance with reliable international industry standards.

Eric Candelier, President of YACCO: “YACCO is pleased to join the excellence of this programme in partnership with the FIM, which reflects our desire to serve our customers around the world with high-performance products and a guarantee of quality.
Since its origins, the YACCO brand has cultivated the values common to motorsports enthusiasts: surpassing oneself, sharing emotions and teamwork.

Through this partnership with the FIM, we hope to be able to demonstrate our commitment to a path of excellence to continue the legend of the Oil of World Records”.

Julien Nevelet, Key Account Manager: “This agreement with the FIM will give YACCO new impetus in the two-wheeler sector. Linking our respective hundred-year-old plus entities will allow us to pool our joint skills for the benefit of the rider. The presence of the FIM logo on our products, which include engine oils and special fluids, will reinforce the conformity of our products with international standards recognised by the industry.

We are already present in more than sixty-five countries spread over four continents, but we still wish to strengthen our image as an essential oil with the general public as well as with professionals, while increasing our international development. We are happy to be able to join forces with the FIM.”

On completion of the agreement, Fabio Muner, FIM Marketing & Communication Director, stated: “The FIM is delighted to welcome a company that has such a great heritage and has captured so many World records over the long period it has been producing oil for motorcycles and other key sectors. As a brand, Yacco recognises the extra value that being part of the FIM Quality Product Programme brings, and how they can use this to reinforce their marketing activities, not to mention the weight it adds to their already strong reputation.”