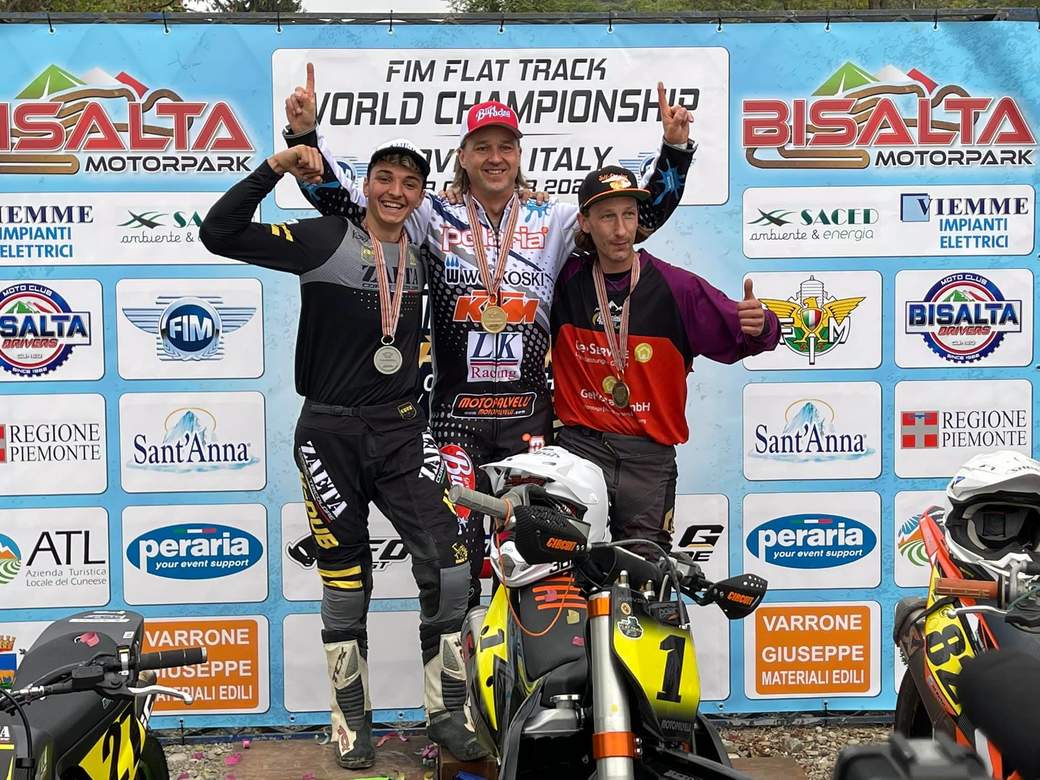 Finland’s Lasse Kurvinen ensured a fitting end to his FIM Flat Track World Championship career as he raced to a second consecutive title before confirming his retirement from the series at 43 years of age.  Kurvinen, who needed only a podium from the season finale to secure the 2021 crown after victories in the German and Hungarian Rounds to start the year, claimed second at the Boves TT, located in the Bisalta Motor Park in North-West Italy.

It was also a day of celebration for Francesco Cecchini, a popular winner on home ground in what was his much-anticipated return from a broken shoulder blade suffered in Diedenbergen.  Cecchini, visibly hesitant in his opening qualifying ride just days after surgery, gradually improved as the meeting went on and was delighted with his first victory since the 2020 Czech Round.  Out-paced to Turn One after missing the start from the outside of the front row, the Italian determinedly took the long route around the bottom bend to make up two positions from fourth, and then picked off early race leader Sébastien Jeanpierre to see clear air ahead on Lap Three.  Lasse Kurvinen then moved quickly through with a bold outside pass on the Frenchman to give chase, but as the race wore on the Finn gradually settled for second to safely bring home the world title.

Kevin Corradetti had harboured hopes of snatching honours from Kurvinen after claiming his first Final win at the Czech Round last weekend, but he could only qualify fifth in Boves and was left on the second row of the grid for his home race, while Kurvinen was error-free from the front row to push the number one plate beyond the Italian youngster’s reach.  In fact, Corradetti found it difficult enough just to bring home silver: he was left to pick himself up from a crash that brought out the red flags on the first turn of the Final, then in the re-start he was boxed in to seventh, dropped to eighth with an outside run seemingly borne out of desperation, and only later recovered two places to sixth.  Nonetheless, Corradetti is a deserving world number two, keeping Kurvinen honest until the last race of the season with two excellent podium finishes.

The bronze medal for 2021 was the last to be settled in a decisive last battle of the campaign in Boves; with little separating Markus Jell, Gerard Bailo and Daniele Moschini in terms of points, they were always likely to meet on track as well.  Moschini headed the other two for fourth early in the race, but almost fell attempting to pass Sébastien Jeanpierre on Lap Four, went to the back, and his hopes were ended.  That left Jell and Bailo in a duel whilst attempting to pass the Frenchman: Jell, with track position, was next to attempt a move, but he was caught offline and forced to back out of his determined effort into the top bend, which allowed Bailo past.  A lap later a mistake from Jeanpierre let both Bailo and Jell through for third and fourth on track, Jell losing only two points to direct rival Bailo by sitting behind him and thus able to claim bronze.

Bailo nonetheless ends his season as he started it, with a hard-earned third place.  And Jeanpierre, despite ultimately dropping to seventh, enjoyed probably the best day of his Flat Track career so far.  The Frenchman was the top seed from the qualifying heats, claimed the holeshot in the Final, and battled well against stiff opposition, holding a podium place until his Lap Eight error.  It was also a season’s best for Great Britain’s Tim Greig, who is set to bow out of international competition at the end of this year, and did so with a creditable twelfth place.

But the day belonged to Lasse Kurvinen, the only rider to make all four podiums this season, dropping just six points throughout to become 2021 FIM Flat Track World Champion.

FRANCESCO CECCHINI (2021 Italian Final winner): “It has been a difficult year for me, right from the crash at the first Round in Diedenbergen, knowing I would lose out on the World Championship season I was mentally shaken.  So today I am really very happy; I couldn’t have imagined being here, just 38 days since the operation, and winning proves that even if this wasn’t to be my year, I am still around and still strong.”

LASSE KURVINEN (2021 World Champion): “I believed in my chances to win before the season even started.  But this year was very important for me, to win races, to ride at the highest level, and prove myself.  Today I was close to Cecchini, but after four or five laps I decided not to take any stupid risks and to remember that the most important thing was to be World Champion.  Next year there will be a new World Champion, I’m not so young anymore, I’ve been on a bike for 40 years, and two titles is enough for me.  This is definitely my last World Championship race, although now I would like to sign off on my career with a farewell – my “last dance” – visit to the USA.”