Dakar, Day 13: Sunderland wins the 44th edition of the Dakar 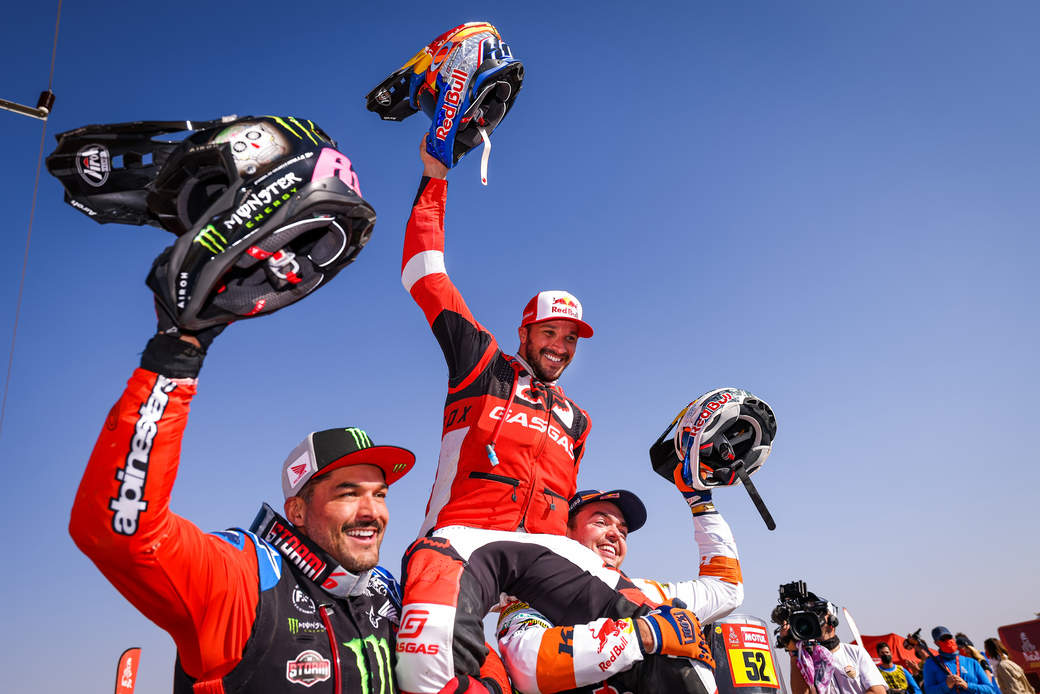 He did it. At 32 years old, Sam Sunderland claimed his second Dakar title five years after his first triumph in 2017. It is a first for GasGas, which recruited him at the eleventh hour last December.

It comes as a relief for the Austrians, the constructor behind the red brand, who wrested the crown back from Honda after two years. Pablo Quintanilla took second place for HRC and Matthias Walkner will represent KTM on the bottom step of the podium. Fourth in the virtual classification at the last time check, Adrien Van Beveren looks set to finish just outside the top 3.

To say that the bike category was the most disputed of this 44th Dakar is an understatement. You have to go back to 1994 and the 1'13 between Orioli and Arcarons to find a slimmer gap than the 3'27'' that separated Sam Sunderland from Pablo Quintanilla at their arrival in Jeddah! The Englishman is back to winning the race, which had eluded him since 2017.

The years have passed for "SunderSam" whose star was not shining very brightly. When he didn't give up, he failed on the third step of the podium the following year. The Englishman put an end to this infernal cycle by staying quietly in the shadow of his flamboyant team-mate Daniel Sanders. But the man of the first week, "Chucky", stupidly eliminated himself by crashing in the early morning at the exit of the bivouac in Riyadh. Sam was already in the lead of the provisional standings and kept it for four stages in a row, without having won a single stage.

Meanwhile, three other former winners had stumbled at the start of the race and then embarked on an impossible mission: a real remake of 2021 for Price and Brabec, joined this year by title holder Kevin Benavides. Only Matthias Walkner, another former active winner, and Adrien Van Beveren followed the Sunderland line.

The GasGas official was the first to win on stage 8. The famous lead that allowed him to manage the rest of the stage and to make a plan in stage 10. Sunderland, like Walkner, gave up with the intention of chasing down the blue hare of Yamaha Van Beveren, then virtual leader of the Dakar. Pablo Quintanilla also managed to take advantage of the opportunity to take second place, which he had already obtained two years ago.

The young brands such as Sherco and Hero also made their presence felt. Santolino and his Sherco had been in the top five for most of the first week and could have hoped to be in the battle of the leaders before the wind changed. Hero and Joaquim Rodrigues had their baptism of victory on stage 3, paying a special tribute to Paolo Gonçalves. On the shores of the Red Sea, it was once again this colour that prevailed, but no longer that of Honda. GasGas thus washes away the affront inflicted on KTM and becomes the 6th brand to win the Dakar.