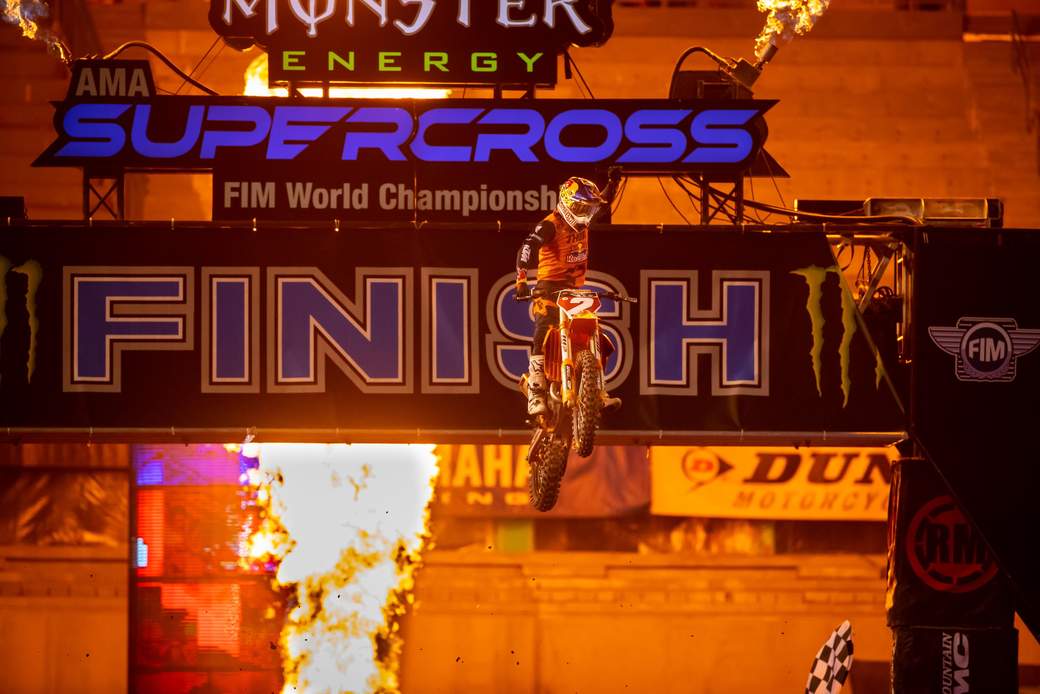 2021 was the fifth consecutive season that the 450SX Class title came down to the final race, and when the gate dropped Marvin Musquin, the winner of the previous round, crossed the holeshot stripe first. Team Honda HRC's Ken Roczen jumped past Musquin through the first rhythm section, and one section later Cooper Webb darted past Musquin into second. Webb needed only to finish 19th or better even if Roczen retained the lead, but Webb didn't look interested in anything but a win. Webb and Roczen battled close and fierce in the opening laps, slowing themselves so that the pack stayed right behind them.

A minute and a half into the 20-minute plus one lap race Sexton secured third and pushed up to Webb's rear wheel. Two minutes later Sexton flew past Webb in the whoops and set his sights on his teammate in the lead. At just past the five minute mark Sexton took over the lead and pulled a comfortable gap. Twelve and a half minutes into the race Webb forced the issue and bumped his way past Roczen on the sweeping first turn to take over second. Musquin took advantage and also got around Roczen at the end of the following straight.

Things went from bad to worse for Roczen and he slowly fell back through the pack, eventually finishing in tenth position. Unless something wild happened, Webb was in no risk of losing the title even with a DNF; that's when the 2019 Champion put in another trademark late race charge and caught the rookie. With less than four minutes left on the race clock Sexton lost traction exiting a corner and Webb pounced, passing him down the next section and holding on for his eighth win of the season and earning his second Monster Energy Supercross 450SX Class Championship title.

Before four minutes had ticked off the clock in the 15-minute plus one lap event Cooper had dropped back to ninth. Up front, Jett Lawrence and Hammaker had a quick battle with Lawrence securing the second spot position. Less than a minute later, Hunter Lawrence was pressuring to get past Hammaker but washed out in a tight right hand corner; he quickly remounted but the mistake dropped him back in fifth place.

In the final minutes, Monster Energy Pro Circuit Kawasaki's Cameron McAdoo put himself into third place while Jett Lawrence erased Nichols' lead a little further up the track. One lap later Jett Lawrence flew through the whoops and into the front spot, then on the final lap of the race Hunter Lawrence moved past McAdoo and into third.

The finish crowned two champions, the first sweep for the Monster Energy Star Racing Yamaha team, and also saw two brothers both on the podium. Nichols' 2021 performances also carry the distinction of finishing on the podium at every round, a feat not accomplished since 2015 when Marvin Musquin managed the same consistency at the top of the 250SX Class.

After making history last year by being the first professional season to finish after the lockdown interruptions, Monster Energy Supercross delivered another full 17-round racing season in 2021 through four triple headers, two double headers, and four Super Tuesday Races. All the thrills of the season can be re-watched on Peacock.